Lanzarote is a very unique and diverse place. You can take yourself from arid volcanoes to white sandy beaches in only a few minutes. The clement sea air and cooling summer breezes maintain a very mild year around climate.
Under these mainly blue skies are some amazing things to see and do.
This is the start of a ‘Top Ten’ series of things to see and enjoy in Lanzarote.

If you mix the most historic town and ex capital of Lanzarote with a super diverse market you get the Teguise Sunday Market. Artisans from all over the island congregate every Sunday to offer you their wares. There is so much to see and do. In the main square or Plaza you will often hear live music. The bars and restaurants around the town fling their doors open and offer some amazing traditional cuisine. Stall line up along the myriad of streets to sell everything from Lanzarote grown and made natural Aloe Vera to hand made leather ware, t-shirts, general gifts and specialised products. The market starts around 9am and starts to close down around 2pm. There is loads of parking all around the outskirts of town. Coach companies offer very good prices to get you there and back and also bus services are available.

Alongside the quaint, traditional and very authenticate town of El Golfo can be found the ‘Lago Verde’ or ‘Green Lake’. On the beach and above the high tide mark is a large and curiously green lake. Algae in the water proliferate and turn it green. On its own it may only be a little impressive but set at the bottom of a dramatic cliff on a black sand beach with Atlantic waves rolling in it becomes a real site to see. Whilst there look amongst the stones on the beach and discover a volcanic gem stone locally known and ‘olivine’. This is a transparent green gem that gets produced at the time of a volcanic eruption. You will find examples of this stone made into beautiful jewellery at the Sunday Market in Teguise. Find the beach stopping in the car park on the left just before you enter the town of El Golfo. Walk along the path to the beach.

Rough translation ‘The Kettle’ or ‘Boiling Waters’. Found a few kilometres south of El Golf are these curious volcanic rock structures at the edge of the sea. Over thousands of years the hammering waves have created hollows and bridges across the sea. Pathways and have been made amongst these allowing visitors to explore. The main attraction is the power of the incoming waves as they crash and splash into the caves and against the vertical rock walls. Made even more impressive in the Winter months when there is large storm surf. Stick around until sunset and have your mind blown again by mother nature and her myriad of orange tones glowing across the sky and down to the horizon. There is a huge car park alongside and coach services.

7 – The white sanded beaches of Papagayo

In the South of Lanzarote just outside Playa Blanca you will find the five Papagayo beaches. Located in a protected national park they comprise of Playa Mujeres, Playa del Pozo, Playa de la Cera, Playa del Papagayo and just around the headland Playa Caleta del Congrio. The one you see in all the photos and more cove shaped is Playa del Papagayo. All the beaches have almost white sand, beautiful clear water and amazing fish life. All are accessible by taking the track from the large roundabout on the way to Femes from Playa Blanca. On the small headland between Playa de la Cera and Playa del Papagayo is a small beach bar or Chiringito called ‘Casa El Barba’. All the beaches enjoy some of the islands best weather, even when there are strong Norther Easterly winds they are protected and still pleasant.

Built by the islands favourite and most influential artist, Cesar Manrique, in 1991. On the outskirts of the quaint village of Guatiza and not easily missed because of the huge sculpted metal cactus outside. Within the sheltered wall of the gardens is to be found this converted sand quarry. Featuring over 450 kinds of cactus totalling 4,500 plants. The Cactus Garden celebrates Guatiza which was famous for its production of the purple dye cochineal which is produced from a beetle living on the cacti cultivated there.

The island of Lanzarote has much to thank Cesar Manrique for. He is well known for his role in kerbing politician and developers voracity for overdevelopment. Taking Gran Canaria and Tenerife as examples of how to lose the true culture of an island he helped install strict building rules in Lanzarote. Manrique also instilled a passion for the arts and culture. Throughout his life he created art across the whole island, wind blown mobiles located on roundabouts, cameos de algae, cactus garden and much more. The centre for his creative juices for many years was his private residence in Tahiche. Built on a huge lava flow this unique house is now open to the public. Visit his house and get a glimpse into the private life and world of Cesar Manrique.

Rough translation is ‘lookout to the river or ’strait’. Between Lanzarote and La Gracious is a stretch of sea a few kilometres wide. On the Lanzarote side are huge cliffs going up around 600 meters. Perched on the very edge is the building known as ‘Mirada del Rio’ a Cesar Manrique typed house with truly amazing views to La Graciosa. Inside there is one main room with huge glass windows looking out to the views, also a coffee bar with table to sit and marvel. Outside is a terrace again with same views. There is ample parking and a small fee is charged for entry.

In 1730 there were eruptions on Lanzarote lasting six whole years. One family of shepherds had to seek shelter and used these caves to live in until the eruptions passed. The family name was Verde thus the origin of the name. Later the caves were used to store slaves taken from the local population before being shipped overseas. At other times to hide from slave traders and muslim invaders.
The caves were formed from lava flows from Monte Corona, as the lava cooled on the surface flows continue underground and create the tunnels or caves. The tunnel system creating the Cuevas de los Verdes is the longest in the world. The caves you visit is only a small section of the entire system. Where the roof of the caves collapse is known as a Jameo. The full extent of the caves run for 6 kilometres and another 1.5 kilometres under the sea. A guided tour is part of the entry fee and leave often around the safe part of the cave system. There is also a concert hall with amazing acoustics in the caves that frequently host concerts.

A Jameos is created when a lava tube roof collapses leaving an open roofed tunnel. Jameos del Agua is the end section of the long lava flow from Monte Corona and is in the protected area called the ‘Monumento Natural del Malpas de la Corona’. It is a section of several collapsed roof section and an intact cave and pool. The artist Cesar Manrique enhanced the natural beauty and created an amazing place to visit. Between the two main sections is a subterranean salt lake with a unique species of blind white lobster less than one centimetre in length. Manrique aimed to create a place where visitors and enjoy the natural beauty with the minimum of human enhancement. There is also a restaurant and bar.

Lanzarote meets the moon. Before 1730 this was the greenest and most populated part of Lanzarote. Six long years of volcanic eruptions totally changed that. Due to the living conditions these six years of eruptions created many Lanzarote residents were forced to move to Cuba and South America. Those that stayed were forced to find shelter. After the eruptions finished a moon like landscape was left behind which is now called the Timanfaya National Park. To preserve park entry is via one road with parking at the end. Once parked you can take a coach tour around the park and listen to atmospheric music and a narrated description of past events during that time. Temperatures below the surface in this region of the island are still very high, this is adequately demonstrated by bushes catching fire and water turning into steam. Descriptions and images do not do the landscape justice, you really do have to see it to believe it. 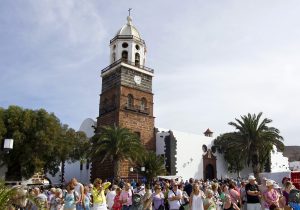 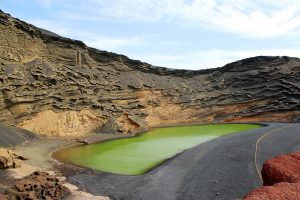 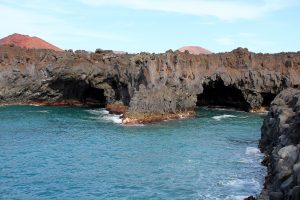 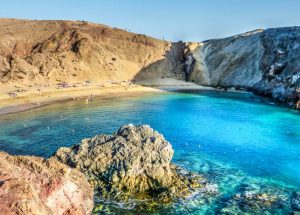 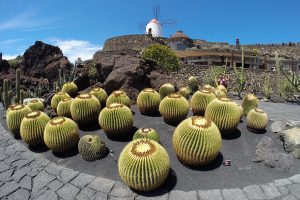 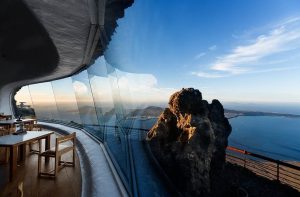 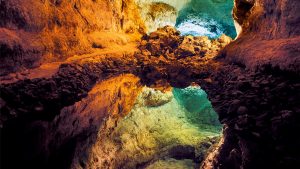 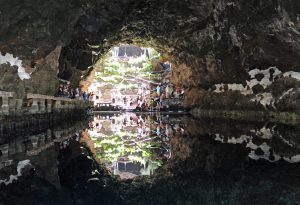 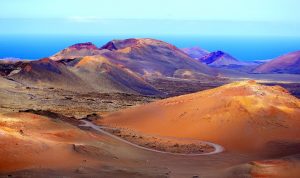