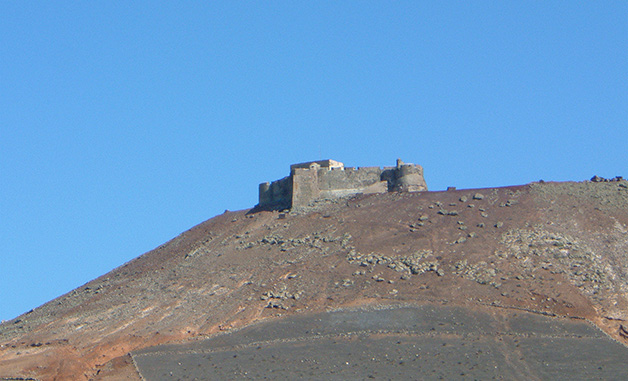 Around 500 years ago life was tough in Lanzarote. Residents had to live of the land and overcome the hot sun, dryness and winds.

To add to their problems were invading Berbers and Pirates that would take away slaves and pillage the island.

In answer to their plight the Castillo de Santa Barbara was constructed in the Fifteenth Century. Originally it was just a look out tower built on the edge of the volcano overlooking Teguise. In the sixteenth century Leonardo Torriani converted it into a proper castle. This was built as a refuge against attackers. In 1576 the surrounding wall was built with towers at the corners.

The Berber attack lead by Morato Arraez in 1586 led to major destruction, this was soon after rebuilt.

Come the Seventeenth Century other Castles and fortifications around the Arrecife port led stopped the inland invasions.

Palomar Militar rebuilt it in 1899 and in 1913 it was given over to the Teguise town hall.

In 1991 the Castle was declared a building of cultural interest and given a protected status. It is now a Pirate and cultural museum open daily to visitors.

Entry to the Castle is through the gates at the bottom of the hill leading up. Follow the road all the way to the top. Parking is next to the Castle.